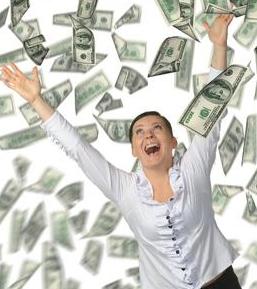 Some idiot is making it rain Bitcoin Cash, and it's not good.

Once again, there's a brewing accounting disaster and ensuing drama to follow in Bitcoin land. This next one has the potential to outdo past accounting disasters, and because the topic is politically charged, can lead to all kinds of upheaval in its aftermath. It's also instructive to examine from a techie perspective, for it sheds light into the kinds of financial scams that people run.

At the center of this debacle is a new currency called "Bitcoin Cash." Bitcoin Cash is a new coin that is derived from Bitcoin in two ways: the code is very similar, except it has the capacity to clear more transactions per second, and it shares the same financial history. That is, if you own a Bitcoin (BTC), come August 1st, you'll also own a Bitcoin Cash (BCC).

This distribution technique is similar to how the new Brazilian real was distributed to the masses, or how stock shares are distributed in the case of a spin off. If you hold a share of Google, you end up holding both a Google and an Alphabet share after the split.

It turns out that at least one, possibly more, cryptocurrency exchange gets this accounting wrong. This creates the opportunity to make money out of the thin air. At the same time, it also creates the possibility for exchanges to go bankrupt.

Here is the distilled version of how the popular exchange Bitfinex plans to account for the BCC coin distribution:

The token distribution methodology will be:

This is a good time to check up on your ability to detect scam opportunities. Do you immediately see how you can abuse these rules to make money?

If you need a hint, it's worth pointing out that this distribution method is in direct opposition to Bitfinex's own guidelines on how coin distributions ought to work.

Ok, those of you who can see the scam and have loose morals have probably stopped reading at this point and are busy positioning themselves for their own little scam. Let's now go over how the trick works for the rest of us normal people.

The problem has to do with how positive BTC balances are unconditionally rewarded with BCC, while negative balances are not accounted for properly.

In particular, imagine our favorite player Alice. Suppose that she has 1 BTC, and she deposits it at Bitfinex.

Stuart (the Scammer) reads the rules above, and creates an account on Bitfinex. He then margin-shorts 1 BTC. That is, he borrows Alice's 1 BTC, and sells it. He now owes 1 BTC to Alice.

Stuart then, in a funny trade, buys his own margin-short with cash. He now owns 1 BTC, and owes 1 BTC to Alice. His position is market neutral and he carries no risk. Alice also owns 1 BTC.

Then the split happens. Bitfinex decides to credit both Stuart and Alice with 1 BCC, each! That is, Bitfinex erroneously creates a liability of 2 BCC. Meanwhile, they only actually own 1 BCC.

This goes counter to all kinds of established accounting principles, including Bitfinex's own guidelines for how to account for coin splits.

It is a terrible outcome for BCC. BCC price will be lower than its natural level as a result of this fraudulent accounting practice.

Of course, the BCC that Bitfinex creates out of the thin air like this is not real BCC. The BCC price at Bitfinex should not be comparable to BCC price elsewhere. But of course, the market will not know how to compare or price in the bankruptcy risk. As a result, this will depress the actual BCC's price. It is, in effect, blowing through BCC's 21M cap by manufacturing fake BCC.

It is also terrible for Bitfinex, in that they can lose money and even go bankrupt, because they are creating more liabilities for themselves than assets (see update #2 below, it's actually worse than what I wrote here). But Bitfinex are old pros at running a bankrupt exchange. They previously lost $60M, socialized the losses across their user base, issued tokens for the loss, then bought their own tokens back for pennies on the dollar, thus appearing to come out of bankruptcy. Their Tether contracts ended up growing in "assets" at a time when their banking operations were interrupted, leading many to conclude that Tethers were unbacked and untethered securities despite their marketing and name. The next exchange on the Fed's radar for flaunting laws, accounting practices and plain old ethical behavior, after BTC-E, ought to be Bitfinex.

The Scam is Underway

Are people actually taking advantage of this loophole? You bet!

The short interest at Bitfinex is at historical highs. And yet it's not due to negative sentiment -- these are neutralized short positions, where the same person is both shorting and going long, just to game the system. As a result, the Bitcoin price is unaffected even while huge short positions are being developed just to game the broken accounting.

The real losers at the end of this will be all of us, regular cryptocurrency enthusiasts. The SEC, in its landmark decision where it rejected the notion of a Bitcoin-backed ETF, cited specifically the unprofessional way in which most Bitcoin exchanges are run. The end result of all these small games is that, yes, some people make a few coins in the short run, but the cryptocurrency cause is set back, and the reputational damage punishes everyone for years to come.

Update #2: I evidently overlooked an aspect of Bitfinex's plan. They are indeed doing everything I mentioned above, except, to not create a liabilities to assets imbalance, they plan to multiply all credited BCC with a coefficient. The coefficient is going to be determined by the amount of open interest. So in the example above, both Alice and Stuart would be credited with 0.5 BCC. I'm a bit surprised to see this socialization of winnings. We had seen previously that Bitfinex had socialized losses, but now they have gone full communist. Leaving this amusing transformation aside, there are three problems with this plan.

First, most people are not aware of it. Traders are under the impression that this maneouver will net them 1 BCC. Worse, people who simply hold 1 BTC on Bitfinex, like Alice, will lose a substantial percentage of their just earnings to these short manipulators. No one knows exactly how much BCC they are going to get, even though this arithmetic should be dirt simple.

Second, Stuart can move his BTC off exchange just prior to the fork and collect genuine BCC, sticking it to Alice, who will get even less BCC as a result! Way to double down on the scam.

Finally, the entire accounting is at the discretion of the exchange. This same exchange could not be audited when it was bankrupt, there is no way it can be audited now. They can easily reduce the coefficient by, say, 10% for some easy BCC profits.

Overall, there are two reasonable courses of action: (1) Go all in, and play this game on Bitfinex. You'll have to do the margin trade and the corresponding long. And you'll have to hope that they calculate the coefficient fairly. If you're going to roll with a gang, you'll need to adopt their customs. (2) Take your money out before the fork. You will get your just BCC reward, in full, and you won't have to trust anyone to keep your balances for you.