The title sums up my stance on last month's craze in the Bitcoin world, a new service for tipping people online, called ChangeTip. I mean it both as a statement of fact and a wish. As in, the service is plaintively destined to die if it honestly operates the way it advertises. And we should rejoice when this happens, because we'd all be better off without it, for it is strictly an information leak, a liability and a security hole. 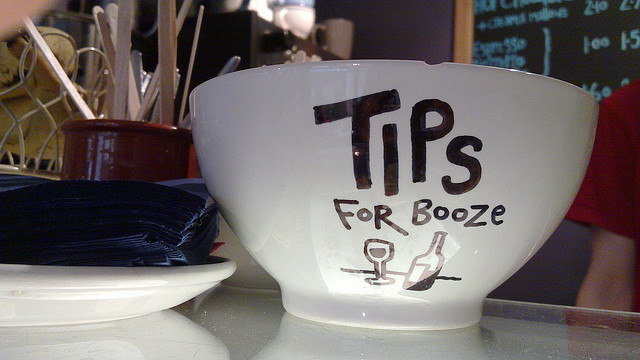 Unlike Bitcoin tipping, this jar is honest about its real intentions.

Let me describe what ChangeTip is for those who are not familiar. It's a centralized service by which people can send small amounts of money to people online. In that sense, it's exactly like every other centralized online payment system, like Flooz, Beenz, and so forth. It has a convenient user interface through which one can tip people on Twitter, Reddit, and other social media, designed for tiny tips. You can tweet "have a donut hole" at someone, and they'll get credited $0.10 from your account. There are a few dozen confusingly priced items you can tip (a taco, a beer, an upvote, etc), but most people use the service to tip in fractions of a Bitcoin ("bits").

ChangeTip somehow tapped into the Bitcoin community, which paradoxically saw in it an opportunity to expose the masses to their decentralized currency. People would see the tipping and go "whoa, what just happened there?", which, in turn, would draw more people into Bitcoin. Never mind the fact that the person saying "whoa" was often an accomplice, kind of like those terrible radio ads where a woman asks purposefully dumb questions and a man man'splains an awesome new deal down by the mall.

So they have been tipping fractions of a penny, typically on the order of ¢0.1-¢0.5, in all kinds of venues. I did not mistakenly use Verizon math there. Those are literally fractions of a penny, $0.001 to $0.005 dollars, an amount of money that no one would bend over to pick up off the street because it does not have physical form. Not unless you cut up a penny. 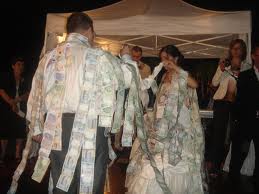 Unless you're pinning substantial cash on the bride or the groom, throwing money at people is considered gauche. Some would say that it is gauche even then, but those people have never gone sniping and don't understand the value of a ghillie suit.

These tips litter online discussions, often in egregious ways. There was one case where someone posted about how his dad passed away from cancer after 6 months of cancer treatment, supposedly subsidized by the son's Bitcoin mining operation, where his last words were "go mine some coin." We can debate whether or not the original post was fake, but we should all agree that the following response was inappropriate: someone tipped him a whopping 3 cents, and unironically said "Mad feels." What is bigger than the mind-numbing sense of loss and vast emptiness that follows the death of a family member? The sense of loss for words at seeing $0.03 thrown to fill that gap. Lest you think I cherry-picked a rare example, google shows that I am not working hard to find this stuff. The ChangeTippers' vision for the future is literally one of people with social disorders throwing penny shavings at each other.

But let's leave the social considerations aside, and let me tell you why ChangeTip is a terrible idea on its own merits.

Destined for A Pivot

According to ChangeTip's own disclosure, after a huge quarter of growth, their cold wallet holds 155BTC. That 155BTC amounts to less than $60K. Which in turn is approximately the cost of a few months' salary for a junior developer in the valley. 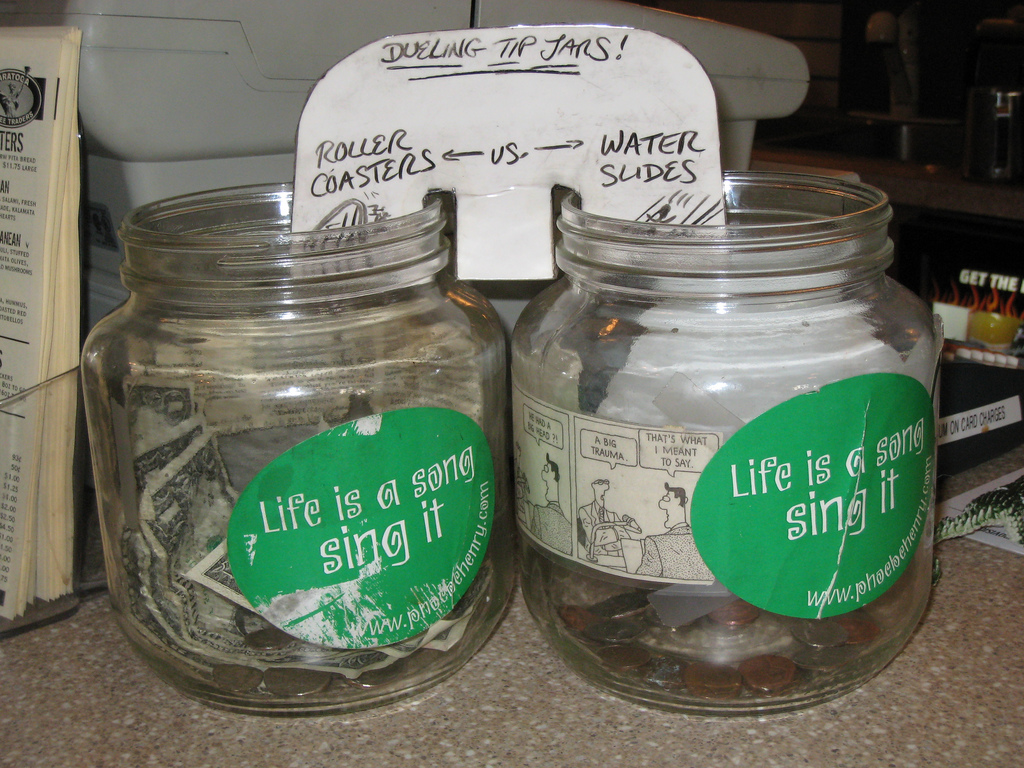 Can I tip for a Bitcoin roller coaster ride? Just kidding, I take that ride on a daily basis.

Keep in mind that this is only the money they hold on behalf of their users, so we have to look at their business model to derive their actual revenue. ChangeTip has not started charging their users yet, but they plan to finance themselves with a 1% fee on all transactions that take money out of their system. That means that the maximum revenue they can generate from their current holdings is $600. Note that I am still not using Verizon-math and I did not leave out a "K" or "M" at the end.

To help visualize that, $600 is roughly equal to the average Bush tax rebate per household, which most people squandered on a set of wireless speakers. And that's revenue, not profit. Assuming a multiplier of 20X, the total value of the company is a big fat $12K. Let's assume, wildly optimistically, that ChangeTip will usher in a new era of free-flowing tips, and we will transform from major industrial power that landed a drone on an astroid to a society that runs on baksheesh. Let's also assume new money flows coming in and out of the system, even though one would expect most of the money to churn internally, with very limited cash flow across the service boundary. But let's conservatively double our estimate: that yields a company whose net worth is the same as a low-end Volkswagen, one that will develop electrical problems the day after you roll it off the lot. Yet they raised enough cash to open a dealership through two rounds of funding.

The only way ChangeTip can command a higher revenue than a measly few thousand per year on their current business plan is by selling our information. And they have two pieces of amazing information that no one else has.

The first one is the linkage between our social network identities and our Bitcoin addresses. Bitcoin is anonymous but traceable, and it would be invaluable to annotate different wallet addresses with twitter/reddit/facebook/google account names. Well, with your tipping help, they can. And that's worth something. Before you claim that you'll create new addresses and tumble your coins or whatever, we all know how lazy people are from the way they install flappy bird apps on their phone with enough privileges to launch nukes. Real people will be readily identifiable. 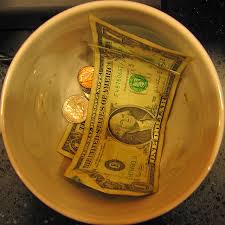 Tips contain fingerprints, and someone is actively collecting them.

Second, they have the linkage between multiple social networks. Unless you exercise an enormous amount of online hygiene and maintain a separate changetip account per social channel, ChangeTip can connect your identities across services. For instance, they would know that your gag account on reddit, the one whose username includes a garden vegetable and an anatomical reference, is linked to your Google account. Or the Discus account you use to harass academics who found flaws in Bitcoin is connected to your real identity as, say, a failed academic at, say, the National University of Singapore.

Of course, even assuming that ChangeTip can remain solvent, and stick to its current business plan, and maintain the safety of its accounts, and provide its privacy guarantees as promised, there's still the possibility that it will get hacked and have its business data leaked. They have taken measures to protect their holdings by partitioning out a cold wallet, but they need to keep all of their valuable business data online for their own operation. This data stores precious information on which accounts are associated with each other, and it needs to be online, where it's vulnerable. 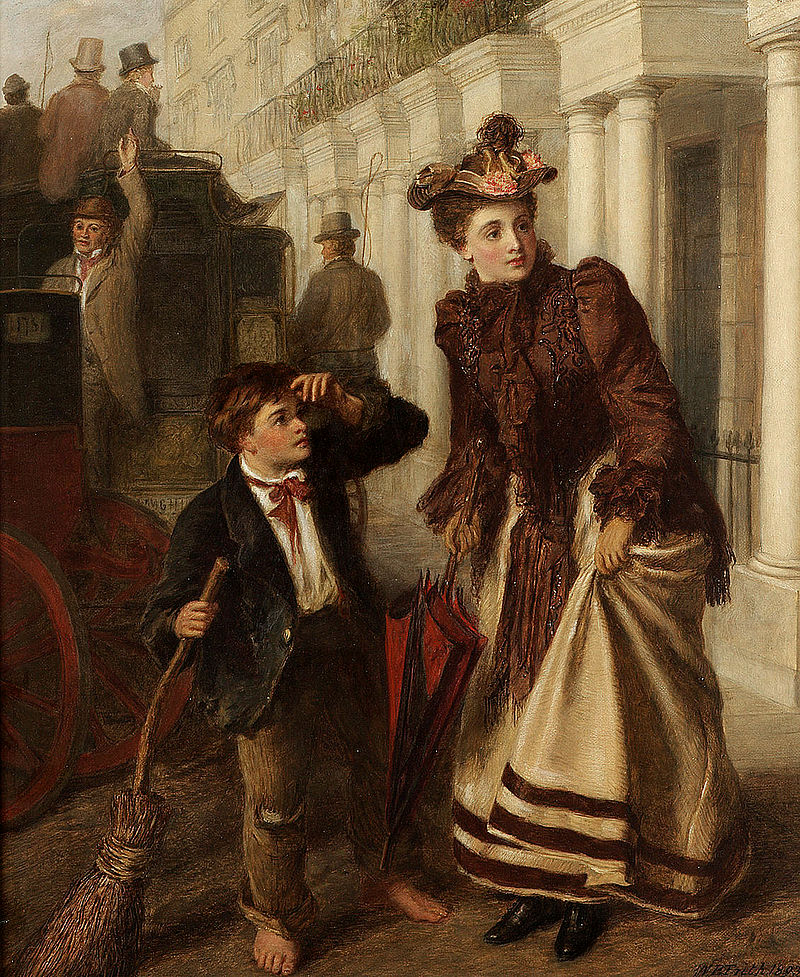 M'lady tips the unwashed street urchins; not the other way around.

The real goal behind ChangeTip tipping, of course, was to give Bitcoin extra visibility under the ruse of doing a micro-good act. Let me quickly address why this is a bad idea.

First of all, every time I strike up a random conversation with a stranger, I discover that they have already heard about Bitcoin. Every. Single. Time. I assume this is because the Bitcoin community has already proselytized the word of our Lord and savior Satoshi Nakamoto far and wide. So, my anecdotal evidence suggests that everyone who will ever hear of Bitcoin has already heard of it. Pushing the currency in underhanded ways will just create derision. We need to work as a community to buy advertising like normal people, and perhaps work on our collective image. After years of acting like enfants terribles, perpetrating a prosecution complex, fearmongering about an inflationary collapse that refuses to happen, veering into antisemitic rants about Jewish bankers, blaming Mt. Gox victims, brigading a Nobel laureate, badmouthing core developers, attacking researchers including yours truly (for finding and even fixing a flaw, and making predictions that were later borne out; you know, things that were actually good for Bitcoin), and beating the drums for countless scams, the real barrier to adoption at the moment is the community itself. Clean up that act, and the rest may follow. Or not, because the online payment space is crowded right now, but it's a first step towards not being sociopathically selfish, which is a prerequisite for reaching a wider audience. It's also a prereq for effective tipping.

Tipping is a nuanced act that requires some social savvy, tact, and grace. Here are some quick tips to reduce the cringe factor associated with tipping strangers online:

But overall, it is far better in most cases to organize a charity drive than to drive-by-drop a few penny shavings. These microtips have never made the world a better place, in the same way that those New-Agey emails about how someone once paid for someone else's toll on their commute never accomplished any lasting societal change for the better. As the New Age flakes like to say, not all who wander are lost -- but they sure get in the way of other people. Changing the world is difficult and requires concentrated action. Penny gifts are a dead-end distraction, an easy way to appease one's conscience and justify inaction.

Finally, some people trot out the argument that the online tipping mania is harmless. It's very much not, because the underlying motivations are all too clear and reflect on all of us. It's at best spammy. Tipping penny pieces to increase the value of one's Bitcoin holdings is duplicitous. And yes, even people who were "making it rain in the club" have actually been sued for throwing cash at people. Not everyone is hunting and hurting for dollars, and normal people would like to earn a living with dignity. Penny tipping violates social norms and makes the Bitcoin community look cringeworthy, which in turn is bad for Bitcoin.

Back to ChangeTip: on its current trajectory, it is not a viable company. I am certain that the people who work for it are well-meaning, reasonable people. But the lack of a revenue stream is an inescapable fact. The math portends an unsustainable cash flow; they will ultimately have to fold or else change their business model. When the music eventually stops, our identities will be up for sale. Even if the company manages to stick to its current avowed business plan until bankruptcy, there is no telling what others will do with the ChangeTip data.